As time marches on the Ski & Snowboard show is getting ever closer. Don’t forget to get your tickets early. Remember to enter the promo code to receive an additional discount, simply enter ‘SKIBESPOKE’.

For further information on about the show please see www.metrosnow.co.uk

We hope you have a great time!

We are very pleased to announce that we have had our first article in the TTG (Travel Trade Gazette).

We are very excited to have this exposure within the travel industry. This is a positive step for our first season and shows that people who are booking early are getting the best value for their ski trip!

This is the UK’s only snow, ski & music festival.

The event sees a handful of the world’s best athletes across skiing and snowboarding compete on a specially constructed 32 metre high jump complete with 500 tonnes of real snow. The festival is the only place in the UK to see this level of riding! As the action on the slopes concludes the 4 live stages kick off with a selection of great acts. If that wasn’t enough to keep you amused there is also the retail village to browse round.

This is one après ski party that shouldn’t be missed!

Written on September 6th, 2011
No Comments

We previously posted that the London Ski Show is coming – so get yourself over to Earls Court, 19-23 October for the UK’s largest wintersports show and get in the mood for winter!

As with most things in life (including ski holidays) the earlier you book is often when you get the best deals – so to continue this theme, when buying your show tickets online ,simply enter ‘SKIBESPOKE’ as the promo code to receive an additional discount!

Ischgl – Relax. If you can.

Written on September 1st, 2011
No Comments

27th November sees this year’s ‘Top of the Mountain’ concert in Ischgl to officially start the winter sports season.

Every Year the event attracts new national and international holiday makers. The concert always invites big acts and artists and never fails to disappoint. If you’re thinking of typical four piece Oompah bands, think again – this concert has seen the likes of Katy Perry, Pink, THE KILLERS and even Sir Elton John in recent years.

Why not join the party and take that extra winter break this year? This is one season opening party to be part of!

Please see our Ischgl page for more details on the resort.

The show gives you the opportunity to check out the latest ski equipment, fashion, the top and resorts/destinations. You can also get great prices and amazing discounts on the latest hardward & boots. Or even partake in some early après ski?

The whole family can get involved in activities as there is so much to see and do. As well as some of the UK’s best freestyle riders will be there during the show.

Having seen the show from being a consumer, an exhibitor and working directly on the show itself, in my opinion there is everything you need to inspire your next ski holiday. Why not go along?

All information about the show can be found at www.metrosnow.co.uk

What a difference a month can make! The team at Ski Bespoke were fortunate enough to head out the Alps a few weeks ago, searching for new resorts and hotels that might fit the criteria we look for… As a regular summer snow seeker myself, I packed sensibly enough, with ski jacket and enough beanies for 2 changes a day – but my internal barometer must have been slightly off, as we were instead hit with blue skies and sunshine all week. (Hardly a bad thing) and were fortunate enough to meet some locals. 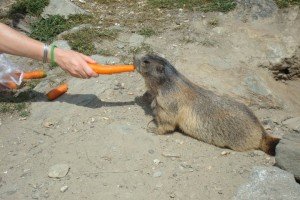 Saas Fee is a year-round resort. A lot of people are surprised when I tell them about how you can still ski in August, albeit on a smaller scale, and you can usually expect the warm weather to help work on ones goggle-tan. Needless to say, it’s rare to have a big dump of fresh snow to help top-up the glacier.

Sure enough, the world works in mysterious ways. Saas Fee is reporting powder conditions since last week! Enough to disrupt the Saas-Fee RIDE freestyle competition and its riders = although I cant see too many people complaining…Surely a sign that the 2011/12 season will be one to savour?!

The Eagle, has landed

Its official! We are now exactly 1 year away from the London 2012 Olympic Games and the United Kingdom’s gold medal hopes are being roundly touted as ‘plausible’ in some circles. And why not? We are a nation capable of producing some fine sporting talent over the years, this should be no exception!

But half the fun in any Olympiad is the emergence of ‘The Underdog’. Someone with no real right to be stood amongst the world’s elite. Someone plucky, determined, with the heart of lion but ultimately completely hopeless (actually, that sums up British athletes fairly well?)

Britain’s best or worst export was of course Eddie ‘the eagle’ Edwards. He famously made it to the 1988 Calgary Olympics; placing last in both the 70m and 90m events. “I was 58 out of 59th, officially. The 59th guy broke his leg the day before.” Said Edwards, and perhaps it was this never-say-die spirit that has now given him his own biopic.

A film chronicling the life story of Edwards has been planned since 2007, with Steve Coogan being originally lined up to play the title role. Edwards said he was pleased with the choice but also that Brad Pitt or Tom Cruise would be better suited. In 2009, it was announced that Rupert Grint – of Harry Potter fame – would now take the lead.

I’m looking forward to the challenge because he’s such a big character,” said Grint. “I’ve never skied in my life, so I guess that might be a problem… But I’m sure I’ll pick it up”

Hopefully this coming cinematic and Oscar contending experience will inspire those budding ski jumpers amongst you to test your legs for the 2014 Winter Olympics – a trip with Ski Bespoke would be the perfect place to start.